Censorship of the Left

We all know of the events that occurred yesterday with the major outlets of the Internet protesting the two "censorship bills" currently under consideration in congress.  While in this case I do agree that those bills will hurt freedom more than help it, I also found an opportunity to once more reveal the hypocrisy of the Liberal Left.

Recently, WordPress censored and ultimately closed down a blog called Bare Naked Islam (BNI).  This blog had been up and running for a couple years and it pointed out, with no hesitancy, the truth concerning Islam.  According to WordPress, they removed it because of some "hateful comments" which were left upon the site.  Of course, we all know this is the furthest thing from the truth.  If it were, many other blogs (mostly on the left) would have been also removed. However, since this has happened, CAIR has been crowing and strutting around that one of their "enemy sites" has been closed down, and the Left let out another sigh of relief as, once more, the truth was removed from the internet.

Since then, BNI has transferred over to another service.

In response to what I perceive to be massive hypocrisy, I posted a comment on WordPress' blog considering this issue.  As you can see in the picture below, my comment was indeed censored as well. 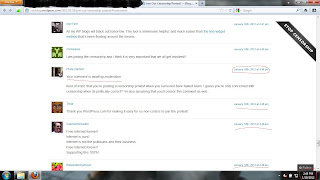 This screen shot was taken today with my comment's time underlined.  You can see that comments posted after mine were allowed.  I also circled the date and time this image was taken. *note, clicking on the picture will enlarge it so that you may see it in its entirety.

You see, the reality is that the Left will only allow certain "ideas" to be open for discussion.  Those that  you propose which are against their philosophy - well, expect to be censored with no outcry what so ever.

In addition, I have contacted WordPress to make them aware of this article, and I encourage you to spread it around as well.  Tell the world that if one truly believes that the internet should be absent of any censorship, then WordPress and others of its ilk must be held accountable!
Posted by TroubledPatriot at 1/19/2012 03:15:00 PM 2 comments: