One does not need to wait very long for the Muslims to show the world their true colors - once again. In a response to the "Draw Mohammad Day" (DMD) event, Muslims have started an "Everybody Draw Holocaust Day" which is set for June 30th, 2010. 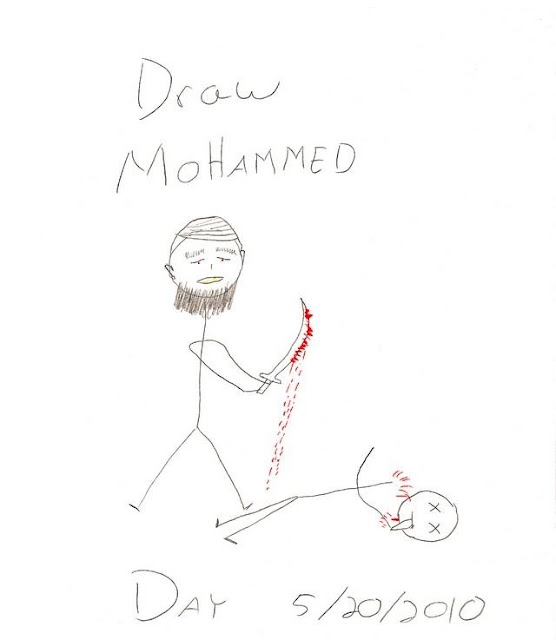 Once more into the breach dear friends!

On May 10th, 2010, UCSD Student, Jumanah Imad Albahri (a member of her university's Muslim Student Association, which happens to be an arm of the Muslim Brotherhood - a terrorist organization) , confessed - with forceful and clear certainty - her hatred for Jews.  In fact, at first she balked at responding to David Horowitz's initial question concerning support for Hamas because:

9-11 Terrorists are Winning (From the Grave)

On September 11th, 2001, fanatical Muslim terrorists crashed jetliners loaded up with terrified passengers into the Twin Towers, the Pentagon, and thanks to the heroic actions brave passengers, into a field in Pennsylvania instead of the White House.  2,996 people lost their lives on that day due to this horrendous act of murderous terrorism.  In response, the Dhimmis in New York have given their consent to the construction of a thirteen floor mosque right next to ground consecrated with the blood of thousands of innocents - all in the name of "tolerance."

There are times when I feel paralyzed simply out of disgust.  This has been one of those times.  As those of you who have been keeping abreast of recent news are aware, there was an attempted terrorist attack in New York City in response to the extremely censored South Park cartoon which dealt with Islam and its satanic founder, Mo.

Greeting readers (If I still have any)!  As you may or may not have noticed, I virtually published nothing during the month of April. The reasons for this are many, most of them having to do with complete a disgust concerning the direction this nation is going, as well as the fact that the resistance to the corruption in Washington is becoming quite fractured.  Also, I've become fed-up with the Tea Party movement as Tea Party Express has endorsed a Democrat in my home state of Idaho.  I've basically thrown my hands up in the air in what seems to be an utterly futile effort to fight for freedom. Yet being as opinionated as I am, those who know me best understand that I can't keep quiet for long.  Therefore, in that spirit I will continue forward.